Blooming in Service and Kindness 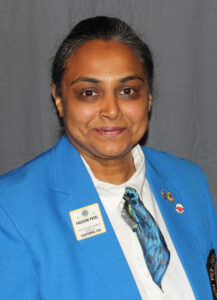 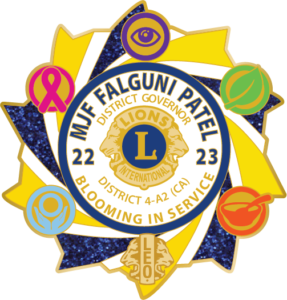 Lion Falguni Patel was born and raised in Lusaka, Zambia, Central Africa, and is the only child of Mr. Joe and Late Bina Patel. She currently resides in Lemoore, CA with her wonderful and service-oriented family: husband, PDG Lion Dr. Chiragkumar “Kevin” Patel, and three children:  Leo-Lion Shriani (a UC Riverside Graduate), Leo- Lion Mannati (Sophomore at Fresno State), and Leo Dev (Freshman at UCLA). Her Lionistic journey began shortly after her marriage in 1996 and initially joined the Karamsad Lioness Club of District 323-F1, then moved to Nadiad Lions Club of District 323-F2 (the largest club in the District with over 300 members), and then finally transferred to Hanford Breakfast Lions Club.

Since her membership, Lion Falguni has served in various leadership and committee positions from the Club level as a Secretary, Membership Chair, Vice President, and President, to the District level as a Zone and Region Chair, CLF Coordinator, and GMT Family and Women Specialist. She has also attended many District Conventions around the world, 3 USA/Canada Leadership Forums, Charter USA / Canada Leo Leadership Forum, and 7 International Conventions (including the Centennial celebration in Chicago), all through which she has been very thankful for the amazing friendships, service, and fellowship she has gained. Lion Falguni is currently serving as the District’s Director for California Lions Foundation. She is also an Associate Member of the West Coast Indian Cyber Lions Club, a first of a kind, where a club was revived and turned into a Cyber, plus a Specialty Cultural Club.

Apart from being a very active Lion, she enjoys cooking, reading autobiographies, customizing, and shopping traditional Indian outfits, cultural activities, and expanding her geographical
knowledge through traveling (good thing she is in an international organization).

Lion Falguni is ready to serve with:
“Vision, Courage, Passion, Integrity, Hope, but most importantly with Kindness”